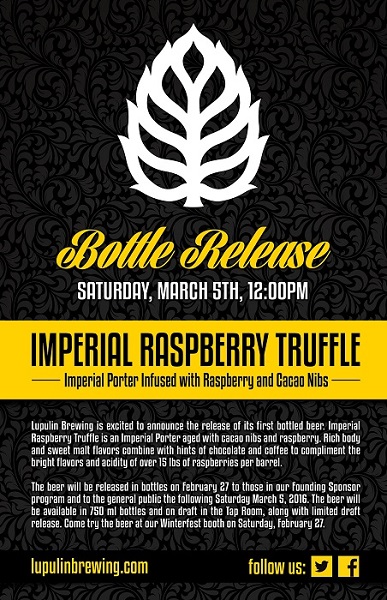 FOR IMMEDIATE RELEASE
Lupulin Brewing Bottle Release
Big Lake, MN – February 22, 2016 – Lupulin Brewing is excited to announce the release of its first bottled beer, Imperial Raspberry Truffle. The beer will be released in bottles on February 27 to those in our Founding Sponsor program and to the general public the following Saturday March 5, 2016. The beer will be available in 750 ml bottles ($15/bottle) and on draft in the Tap Room, along with limited draft release. Come try the beer at our Winterfest booth on Saturday, February 27.
Imperial Raspberry Truffle –
Imperial Porter aged with cacao nibs and raspberry. Rich body and sweet malt flavors combine with hints of chocolate and coffee to compliment the bright flavors and acidity of over 15 lbs of raspberries per barrel.

Lupulin Brewing is a 10-barrel craft brewery and taproom slated to open in 1st quarter 2015 in Big Lake, MN. Lupulin’s brewing philosophy is to create rich, full flavored beers with particular focus on hop forward and Belgian styles. Lupulin Brewing is located on US Highway 10 in downtown Big Lake, MN, and can be found online at LupulinBrewing.com and www.facebook.com/pages/Lupulin-Brewing-Big-Lake-MN.
For more information please contact: