By ryan on November 14, 2012in breweries, Features 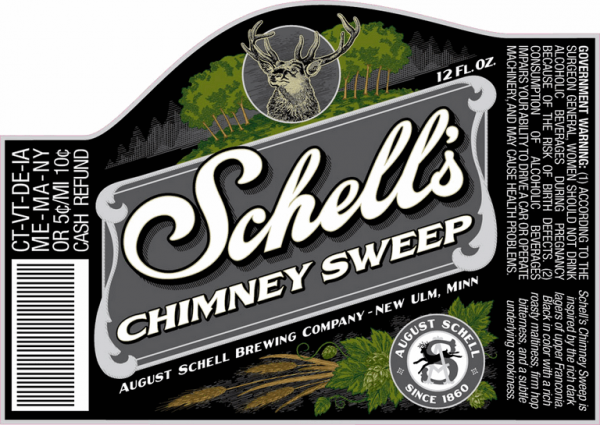 Back in August, we told you a little bit about a couple of Schell’s beers set to hit the market in fall. No doubt you’ve seen their Citra Pils fresh-hop pilsner around by this point. Today marks the release of Chimney Sweep, a black lager “with a roasty maltiness, sturdy hop bitterness and an underlying subtle smokiness.”

This beer will be the first part of a duo of beers that will replace Stout in Schell’s year-round line-up of specialty beers. It will be available November through March and then from April to September, another yet-unnamed beer will take its place. (Nope! Not the Radler.)

The inspiration for Chimney Sweep comes from the rich dark lagers of Franconia. The idea for the beer is a full-bodied, yet sessionable black lager with a wisp of smokiness. Look for rich roasty malt body with notes of bittersweet chocolate and coffee. It has a sturdy hop bitterness and a subtle smokiness for balance and depth. From what I gather it’s not a a beer to be pinned down with a style, featuring the rich malty body of a Franconian dunkel, the roastiness and color of a Schwarzbier and a subtle smokiness, though it’d decidedly not a rauchbier, either.