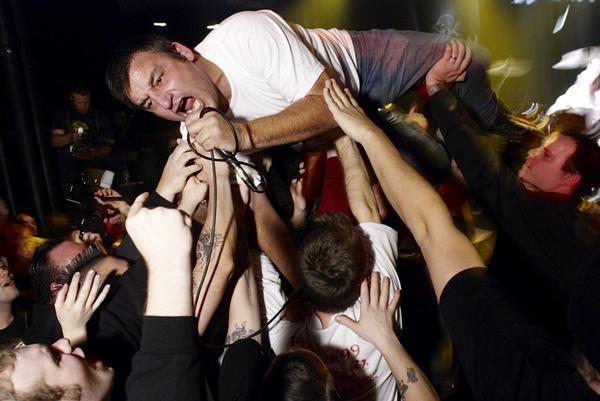 If you read last week’s 5ive, you’ll know that I’ve seen a ton of live bands over the years… it was practically compulsive in the 90s. In any case, let’s jump right the heck in and delve into the five greatest live acts I’ve ever seen. I have this sinking feeling I’ve forgotten something, but let’s roll with this. Go!

Pegboy – Strong Reaction. I saw this band in crappy warehouse/teen club (?) called the Grape Garage sometime in the mid-90s. Obviously they sounded great live and Larry Damore has an awesome on-stage presence, often flailing out into the crowd or singing face to face with the audience. Here’s a clip of the same tune, live in 1995.

Fishbone – Ma & Pa. Punk/funk/ska. I discovered the Red Hot Chili Peppers in about 1988 and with frequent mentions of Fishbone, I had to check out that band as well. Sometime in the early 90s I caught Fishbone at First Avenue in Minneapolis. I’ve seen plenty of animated singers, but none could compare to Fishbone’s Angelo more. The guy literally scaled the walls at First Avenue, leaping, jumping and diving like no one I’d ever seen before. No one. They’ve never been my favorite band per se, but their live show’s energy is unmatchable.

Fugazi – Shut the Door. I caught Fugazi a time or two in the mid-90s at First Avenue. Live, they’re on fire… tight & composed, but not so overly-rehearsed that it seems contrived. I wish they’d tour again. This video is from Instrument, which itself is a great live dvd & album. Totally worth checking out if you dig Fugazi.

Propagandhi – A Speculative Fiction. I first caught Winnipeg’s Propagandhi in a sweaty basement on College Street in Fargo, ND (across the street from the current location of Fargo Brewing Co.) in about 1994. I had heard a few songs from the band, their live show in cramped quarters was a blast until it ended with the cops coming… There was something very cool about the mix of thrash and melody and the dueling vocals from Chris Hanna and former member John Sampson (Weakerthans). So good.

And You Will Know Us By the Trail of Dead. I’ve only caught Trail of Dead live once, but that evening at the Triple Rock Social Club was pretty awesome. If you’ve watched the previous four videos, no doubt you’ve got a bit of a feel for my musical tastes. Not surprisingly, Trail of Dead fit that descriptor with a serious dose of guitar and a nice interplay between precision and music with a raw edge. Live the band is amazing. I think this video captures that…