Ryan couldn’t go to the Beer Dabbler last Saturday, so I made it my duty to check in on the things he thought he’d miss out on. 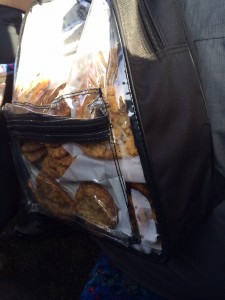 The day turned into a blur.  A cold, mumbling blur.  I will not fault anyone with the event for the cold weather.  It is winter in Minnesota, so prepare for it if you’re going to stand around outside.  Everyone seemed to be dressed and prepared for the conditions – including the dude I sat next to on the bus ride there who wore a backpack full of home-baked cookies.  I didn’t pack snacks, but I was ready.

Turns out I could have done more.  It was damn cold.

Brewers who poured from bottles/cans clearly were feeling fortunate because they seemed to be the only ones able to reliably satisfy the masses.  Excelsior Brewing – pouring from an insulated trailer – was also a hit.  Not everyone’s lines froze, but more often than not we were met with an apologetic shrug and shake of the head from brewers’ booths.  Space heaters, foam insulators and human ingenuity limped many of them along but weren’t enough to save them all from freezing over. 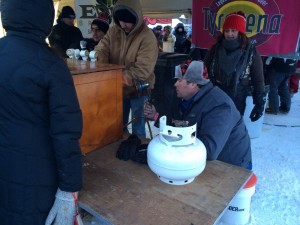 I couldn’t sample everyone (who could?) so I tried to stick to new Dabblers and folks I hadn’t met yet.  Hammerheart, with their immense barrel-aging capacity didn’t disappoint with no less than three barrel-aged beers.  Blacklist Brewing out of Duluth was showcasing their collection of Belgians and the guys at Junkyard Brewing in Moorhead had some good beer and seemed to be the ones most genuinely happy to be there.

Any downtime I had was spent trying to clean out my frosty tasting glass or simply huddled next to someone’s fire, trying to warm up.  It was difficult to enjoy, but I managed to do just that.  The day after, though, presented a different challenge entirely.

That’s what Ryan did miss.  And now, the 10 things he thought he’d miss:

Couldn’t find Burning Brothers, which irked me because I pledged to myself I’d check them out for the sake of my GF friends.  I did try Day Block.  I think.  Probably. Did I mention things turned into a blur?

2. The James Page folks & Oskar Blues folks duking it out over who really was the first craft brewery in cans

Oskar Blues clearly flexed their marketing muscle.  I didn’t bother waiting in line.  Given that I already think they’re ubiquitous and they’ve only just entered the market I don’t think they’re going to make it difficult for me to find their beer.

Probably performed.  The stage was so far from the rest of the action (itself very spread out) I had little clue what was going on.  The only thing I recall hearing from the stage was “This is definitely the most Minnesotan thing we’re ever going to do.” 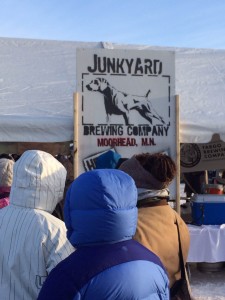 Surprisingly none!  Wise.  Those things aren’t insulated and are a pain to drink from.  A friend told me.

5. Beer from our friends in the plans of Fargo & Moorhead, Fargo Brewing Co. & Junkyard Brewing

I think Fargo had froze by the time I found them but Junkyard did not.  They, along with Blacklist were my two most memorable, friendly stops.  The cold didn’t seem to phase the folks from Moorhead & Duluth. 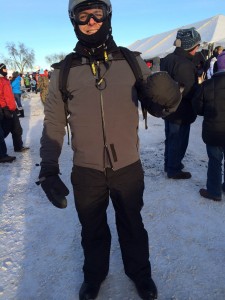 Yes, he biked there

I fully expected to see this, but did not. Clearly this dude, wherever he was, is not without logic.

This actually looked like a blast.  It reminded my co-Dabbler of growing up near Green Bay where their idea of fun was throwing on skis and getting towed behind a Sixties-era Airens snowmobile.

ND: “You want the beer mustard?”

Me: “Yeah, in fact, just skip the dog and give me the mustard?”

Did this even happen?  Seriously, I had no clue where it was supposed to go down.     [Update: It happened. It was free. Sadly they didn’t break the record. Given the cold temperatures, a lack of participation isn’t a surprise. -RA]

10. Having a beer with you. Seriously.

Aww, shucks.  I missed you too.