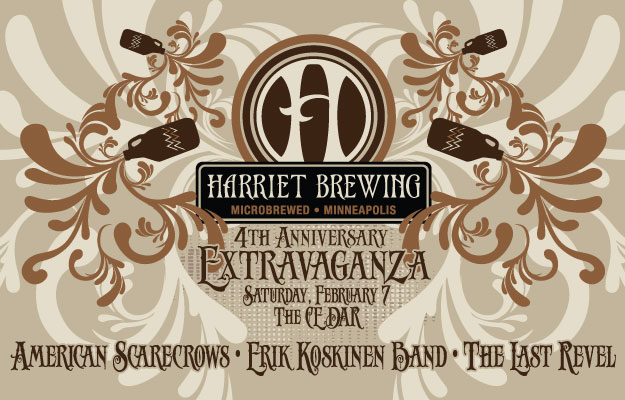 Harriet Brewing is celebrating our Four Year Anniversary in true Harriet fashion at The Cedar on February 7th. We’re taking over all the taps, dancing to top notch live music, and hanging out with the community that has helped us make our first four years absolutely incredible! The total tap takeover begins at 7pm (featuring all of Harriet’s brews) plus live music from local rockers American Scarecrows, Roots/Americana artist Erik Koskinen (full band performance featuring J.T. Bates, Frankie Lee, and Paul Bergen), and folk-trio The Last Revel. Eat at Sandy’s will be parked outside The Cedar almost all night to keep your belly full and your body groovin’. Come celebrate with live painting, a photo booth, live local Minnesota music plus Harriet beer and more to be announced at The Cedar on Saturday, February 7th!

Buy your tickets early as we have sold out every year!
Beer Menu