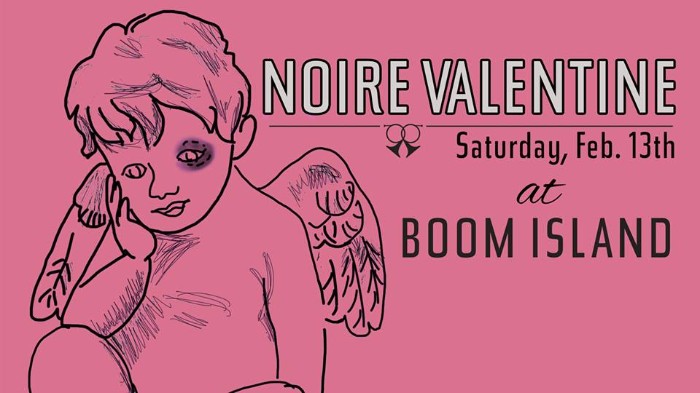 Valentine’s Day is fast approaching, and the pressure builds daily to buy, buy, buy: the chocolates, the non-existent perfectly worded card, flowers, and perhaps the diamond ring. But for the rest of the population, the day represents another year flying solo with limited prospects and constant reminders everywhere that most people are happier than you. Let’s face it: no matter what side of the fence you’re on, Valentine’s Day sucks.

Boom Island Brewing’s 2nd annual Noire Valentine’s Party on Saturday, February 13 from 1-9pm is sure to be the perfect antidote. A special cask of Boom Island’s perennial favorite, the Chocolate Hoodoo Dubbel, will be served along with a variety of activities to wash that ex-lover out of your hair. Attendees will again have the option of writing candy heart messages, snarky or sincere. New to this year’s event, we encourage guests to bring defaced images of their ex to adorn our Wall of Shame. Boom Island will also have photo-shredding therapy stations set up to officially and ceremoniously rid you of those painful memories.

Also new this year, to promote sharing stories of the worst break-ups and bad dates, the Noire Valentine’s party will feature an Open Mic hour from 6-7pm on Saturday, February 13. All participants must share their story in 3 minutes or less, and those interested in participating can sign up with Jim at jim@boomislandbrewing.com. Anyone interested in signing up on the day of the event will be accepted on a first come, first serve basis as space and time allow. Free beer tokens will be given to participants for their bravery.

Expect torch songs, some of which will of course be cloying and annoying. A cavalcade of celebrity broken up matches-made-in-heaven will adorn the walls and video screen, with the obligatory, slightly mean-spirited quotes. The festivities will bleed over into Sunday, February 14, so if you need refuge on the dreaded day itself, Boom Island Brewing will be here for you.