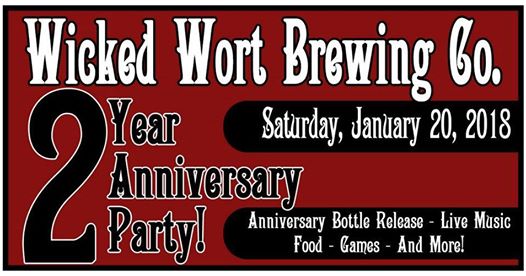 Join us to celebrate 2 years at our Two Year Anniversary Party!

We’re kicking things off by releasing TWO bottles, starting at noon. We brewed an Imperial Raspberry Wheat especially for this occasion (which is clocking in at 10.2% ABV) and named her Burlesque. Half was put into red wine barrels (Cabernet) and half was put into white wine barrels (Chardonnay). Then we’re going to bottle each individually just for you!

Are you still with us??
Because we aren’t done yet!

Then we are going to blend together what is left after bottling, and the blend will be available on tap that night!

We have TWO rounds of live music – Erik Christenson goes on at 4pm and The C-Notes go on at 7:30pm.

We also have TWO delicious food options – Drawn to Smoke and Mama Donato’s!

We are also opening up the lower level for extra seating and extra games! That’s right, there will be fun on TWO levels of the brewery!!

We hope to see you out for a beer or TWO!!