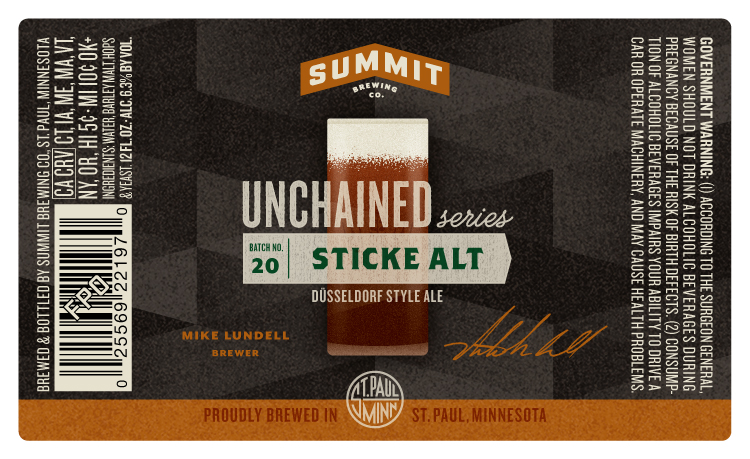 Old timers still lament the loss of Summit Altbier. I remember seeing it around, but quite frankly, I don’t actually remember much about it. I’ll defer to the old timers, who seemed to be quite fond of the beer.

n October, brewer Mike Lundell brings another Alt to the Summit line-up in the form of Summit Unchained #20, Sticke Alt. Perhaps I’m just a beer nerd, but there’s something special about an Altbier. Alts are brewed at relatively moderate temperatures using top-fermenting ale yeast and are matured at cooler temperatures. The resulting beer ends up with a crisp flavor, not unlike a lager.

Summit describes Unchained #20 as a beer with a light noble hop nose with a good malt backbone that is slightly sweet, with a crisp, clean finish.

For this beer they’re using Pilsener, Vienna, Light and Dark Munich, Caramel and Black malts along with Hallertau and Mittelfruh hops. IBUs rack up at 55 and an abv of 6.3%.

Now keep in mind, this info is about Unchained #20. The 19th Unchained beer is still in stores. “Make it So,” is an ESB brewed with Earl Grey Tea. If you haven’t checked it out, you really should. I enjoyed it.