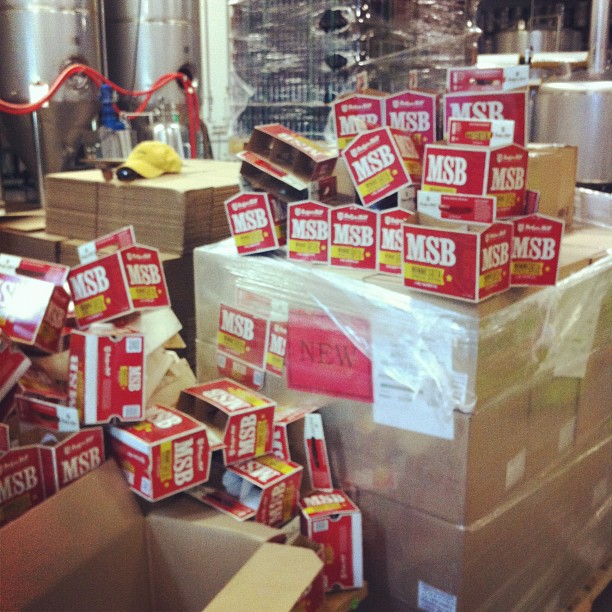 A picture is worth a thousand beers, right? Photo via Badger Hill’s Instagram feed.

Badger Hill Brewing Co. has been bottling recently. We’re excited to announce that you’ll see their  MSB (Minnesota Special Bitter) and Three Tree American Rye in bottles in the Twin Cities next week. Foundation Stout will follow! Congrats to Badger Hill! You can read the full press release below.

“We are extremely excited for this next step in our growth at Badger Hill Brewing” says President Brittany Krekelberg. “We have been working hard the past 2 months to get our bottling line up and running. Our fans can now enjoy a Badger Hill MSB or Three Tree in the comfort of their homes, and we can also introduce ourselves to a new audience.” Badger Hill which debuted in June of this year, will support the launch with tastings at several liquor stores throughout the Twin Cities.

According to Krekelberg, Badger Hill’s alternating proprietorship agreement with Lucid Brewing was a key factor in their launch of 12 oz bottles. “Our relationship with Lucid has allowed us to really focus on high quality.  We have been able to invest additional capital on better equipment, such as advanced controls for our fermentation and brite tanks, and have purchased a new bottling line. It is important for Badger Hill to put out the highest quality product, and our new bottling line ensures that quality.”

Where to find Badger Hill Brewing 6 packs? Retail locations that carry their 12oz bottles will be available on Badger Hill’s website along with bars and restaurants that carry them on tap. “Finally, we can now answer the question we most often get asked” says Krekelberg, “‘Where can we purchase a six pack of your beer?'”.

A brew made in the tradition of English Special Bitters. The use of English malts such as Marris Otter and Crystal 60 provide a smooth malt backbone with small caramel undertones, medium mouthfeel and hints of biscuit flavors. The traditional ESB yeast adds complexity to the beer yet allows great clarity. The use of 4 English and American hops throughout the brewing process, including dry-hopping, provides traditional excellent hop flavor and aroma, with a bitterness that is evident but balanced. Finishes slightly dry. (ABV 5.8%)
Three Tree American Rye: Style – American Rye (Roggenbier/Pale Ale hybrid)
Extremely complex, yet dry and refreshing. The blend of seven Belgian, American and German grains gives this beer a profile that is hard to match. The bready, spiciness of Rye is complimented by subtle saison and sweet caramel malt flavors, and true balance is achieved by the use of one unique American hop throughout the brewing process. A hybrid German yeast finishes the beer very dry yet with subtle hints of banana and clove.  (ABV 5.2%)

Foundation Stout: Style – American Stout
An incredibly flavorful and complex stout that belies its easy drinking nature. Although classified as an American Stout, this beer’s ancestry is rooted in the traditional English Stouts and Porters of yesteryear, where drinkability and robust flavor went hand-in-hand. The initial flavors that come through are a moderate caramel presence with slight chocolate and coffee essence in the background. Medium-high mouthfeel is evident but not lingering as the beer finishes surprisingly dry, complimented with citrusy bitterness of American Hops. (ABV 6.3%)

Family owned and brewed in Minnetonka, MN, Badger Hill Brewing was founded in 2011 by two brothers united by a hankering for travel and craft beer. Badger Hill is committed to brewing great beer and helping elevate the Minnesota craft brewing community.

More information on the Badger Hill brewery, beers and upcoming events can be found at their website www.badgerhillbrewing.com.