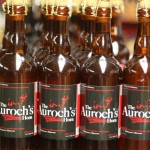 Curious to try one of Minnesota’s latest offerings? The folks at Heritage will have Joe Pond from Olvalde Farmhouse Ales at the store today for a tasting of his first beer, The Auroch’s Horn.

Rollingstone, Minnesota? I’ve never heard of it either, but that’s the home of Olvalde Farm, outside of Winona way down the Mississippi. In a town where his only off-sale retail option is the Mini Mart, Joe Pond is making original Belgian-style beers using authentic techniques from that country’s long brewing history. It’s not like he is a rookie at this either, honing his skills at hometown brewery Summit and Goose Island in Chicago. His first 750ml release is closest in style to a Braggot, and their website gives an interesting description:

The Auroch’s Horn is a modern reinterpretation of ancient ale brewed throughout Europe more than two thousand years ago. Ale was a staple of the barbarian diet, with Roman historians documenting a beverage made with barley, wheat, and honey in Britannia, Gaul, and Germania. The ale was consumed from the horn of the auroch (or aurochs), a now extinct wild bull.

Despite an awesome honey flavor, this beer is not overly sweet, with a slight hop bitterness to keep it balanced. It’s one of the more interesting brews we’ve had lately, and you can throw your support behind a Minnesota brewery.

We’ll have Joe in store for this week’s Thursday tasting on the 14th from 5-7PM so you can get the story right from him. We’ve also made The Auroch’s Horn our bomber of the week and it will be 20% off this week only.