By ryan on September 16, 2010in brewpubs, Features, six pack

1. Could you share a little background on your history with Minneapolis Town Hall Brewery, your time with Fitger’s Brewhouse, and for that matter, brewing beer in general (homebrew and/or professional)?

I started homebrewing with my brother Dave in San Francisco. Neither of us knew what we were doing at the time and we created a non-drinkable extract IPA. That did, however, start my desire to make beer. Several years of homebrewing and several books brought me to a local brewery begging to volunteer with them. This led me to an unpaid “internship” with the brewery for a touch shy of a year. At the same time, I was finishing my degree and working as bar manager for a couple of young and eager fellas that had the first “tap house” in Duluth. Upon graduation I asked them if I had to go look for a “real job” or if they wanted to pursue the move to start a brewpub.

The result of the internet, used brewery equipment in Colorado and a Ryder Truck led me to my first Head Brewing position. Pieces and parts with little instruction created the first brew pub in Duluth and Fitger’s Brewhouse Brewery was born. Looking back, I am amazed that we ended up with a functional brewery and pretty darn good beer. Still remember the first pint that was poured from that tap at Fitger’s… two young guys, myself and Andy (the first paid assistant brewer) standing back and admiring a very nice glass of Petroglyph Porter. In fact, I think I still have a photo of that day and I can’t say that I recognize those young dudes…

Three years of blissful production and great community response led me looking for the next move. That was really a tough decision and a difficult day when I sat down with the owners of the brewery and told them I was leaving. I really loved making beer and loved Duluth almost as much. I did suggest to the owners that I had a guy that was brewing in California that was interested in the job. I handed over the phone number of my brother to them and they contacted Dave and decided he was they guy they wanted… I really think that was a good decision!

An 8-month stint in the beautiful UP of Michigan brings me to the day that the phone rang… It was my pal John Haggerty from Town Hall Brewery. John was leaving after 3 years to pursue the “next step” of his brewing career and Pete (the owner) was interested in having me take over the brewery. We worked out a deal that included some aid in my personal pursuit of formal brewing school and I was off to Minneapolis Town Hall Brewery.

After three years of blissful production, I was off to brewing school in the UK. I have now been with Minneapolis Town Hall Brewery for 10-ish years and have had the pleasure of working with several great brewers and an owner that has some very similar goals. 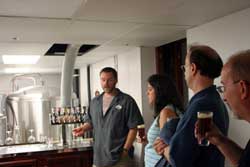 I believe that the first commercial was a Summit Extra Pale Ale and I really liked it. That led me to search out many other Minnesota beers from such places as August Schell, MN Brew, and Lake Superior. I will say that I also consumed a fair amount from homebrewers during that time. The most recent was some beer from those crazy kids at Fitger’s Brewhouse while enjoying the Hoops family Christmas the other day… and I really like that too.

3. Now we know that you’ve collaborated before, but is there a competitive streak between you and your brother Dave? Do the two of you share recipes or swap ideas? Steal each others’ ideas? Anything in the works?

Well, we are siblings… any of you have a little natural competition with yours?  In all seriousness, there was a year that we were both showcasing our beers at the GABF in Denver. Town Hall had some success that year, but I was happier when they read of the name of Fitger’s Brewhouse. That was the first national recognition for their beer, and I was there to see it. Really a proud brotherly moment! I think that we both really love and respect each other and there really is no room for negative competition in that, although I am sure the media would like something more juicy… but it just isn’t there.

That Cherry Grand Cru really turned out well, I was proud to be part of that. Nothing currently in the works with us, but I look forward to our next co-project when the time is right. We really seldom talk about beer with each other, but strangely we often make the same seasonal beer styles that are not the norm.  I see that when I read his emails and simply chuckle. I really look forward to tasting his interpretation of styles because we are different cooks in the brewery, which makes for lots of fun. The only time that I have ever called Dave and asked for a direct link to one of his beers was recently. Fitger’s makes a really nice apricot beer, so when we made one this summer I called Dave to discussed apricot usage. I thought it made more sense than spending a bunch of time re-inventing the wheel for a beer like that. 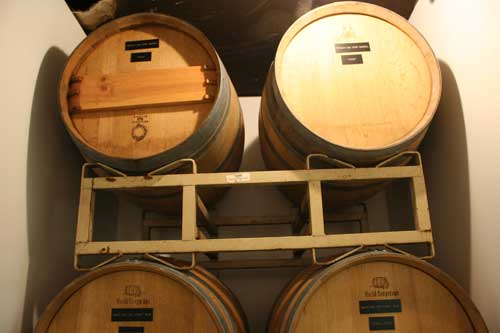 4. What’s your favorite beer from the Minneapolis Town Hall library?

That is a tough one, there have been many children produced in that brewery. They all have their place, but if I had to name a few I may mention:

Our three brewers have much overlap in music. I consider us lucky in that regard. In fact, we have gone to many shows together. Every brewery needs it’s share of  Dylan, Cash, Wilco, M. Ward, and Bright Eyes.  Although, I will say that there is not much Phish or mellow dramatic Euro-Pop when I am around.

We have been very fortunate in Minnesota lately. There has been an amazing influx of very good beer to our marketplace in the last few years. The continued growth of that tells us that the consumer is looking for more quality and more taste. I think we are very lucky in that regard. 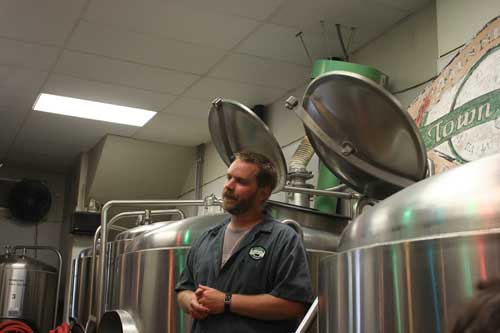