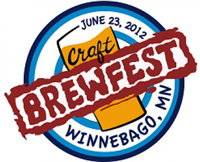 Let’s plan your weekend! Hot on the heels of The Beer Dabbler at Pride this weekend is the inaugural Craft Brewfest in Winnebago, Minnesota. Does this fest sound familiar? If so, it’s because festival organizers worked with the legislature this year to give breweries that don’t normally distribute in Minnesota a one-day-pass of sots to allow them to sample their wares at one beer festival a year in Minnesota.