By ryan on February 18, 2013in breweries, Features 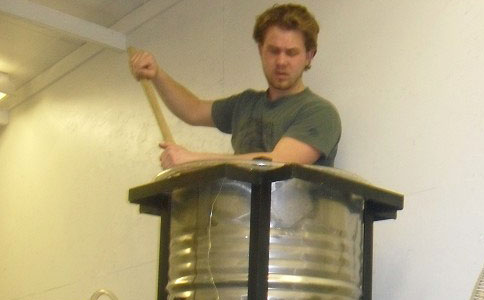 Article comes from Dean at our sister (brother?) site, FMBeer.com. We’re looking forward to checking out Junkyard Brewing for ourselves soon!

A few weeks ago on a Saturday morning I rolled into the Country Cannery in Moorhead.  I was there to meet Aaron Juhnke, and later, his brother Dan as they brewed a batch of beer on the brewing system he built for Junkyard Brewing.  I had not been to the Cannery for a while but owner Ron Stroh was there, as usual.  He was also brewing a beer that day with his friend Mark.  The front retail section where the homebrewing supplies are sold was all back together with newly insulated walls and fully stocked with equipment and supplies.  What was really new was the brewing room added in the shop area in the back section section of the building .  Aaron had framed out a room in the south west corner of the shop that included the sinks, and entrances from back storage room and the shop. 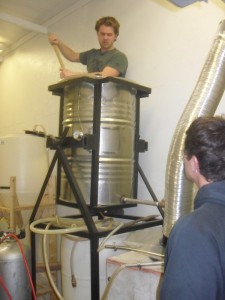 I got to help grind the grain for this batch of Jackpine Savage Stout using a hand drill to power the grain mill filling a big tub.  Aaron kept on adding more specially grains and modifying the amounts from the last batch.  It was only about the 4th time they were brewing on this system so they were still getting used to how it developed flavors from specialty grains.  One thing I noticed on the grain bill was the lack of roasted barley and black patent or similar dark roasted malts.  There was plenty of chocolate malt and dark crystal malts, so I don’t expect this batch to be that roasty.  Ron actually calls this brew a porter instead of a stout.

At this point, Aaron’s brother Dan shows up.  It is hard not to notice is that Aaron and Dan are young: 24 and 21 respectively.  I asked about Aaron’s background and how he went beyond the macro lagers, and I got a nice story of how he was in college in Michigan on the rugby team and the upperclassman were getting some of the younger members some beer for a party. When asked what he wanted, not having much beer before, he started off with Guinness and never looked back.  Always going for beers with more flavor, he soon got into homebrewing .  Originally from Fargo, he came back after college, and is a carpenter and substitute teacher.  Younger brother Dan is still attending NDSU, and his brother’s taste in beer and homebrew heavily influenced his desire for real beer to the point he was soon brewing along side him. Now that the grain is milled, it gets hauled up to the Mash Tun, another 55 gallon stainless steel barrel mounted on a tower above the plastic water tank.  Aaron had to climb on a few things to get the grain all the way up there,  but they will be building a better platform and way to get to the top of the tower.  The mash tun barrel had a nice perforated false bottom and was also mounted on a swivel so it can be tilted down for cleaning but can be locked upright for brewing.

Once the water was up to temp and the grain loaded, they pulled out the pump and started filling the mash tun with the water from the bottom up.  This has worked well so far as they haven’t had a stuck sparge yet.  As we waited for the conversion, Dan was plugging in the recipe into his iPhone brewing app, looking for the predicted final gravity and color.  It was an interesting contrast of current technology compared to the  junkyard style of the brewery using different bits and pieces here and there, but still in a fully functional system.   They got close to the gravity target and started the sparge, using simple gravity to get the wort to the brew kettle just below and to the right.  A sample of the wort was clean and malty with some nice complexity but not, roasty as I suspected.  Unfortunately, they didn’t have any of their prior brews available so this was the only sample of Junkard Brewery beer that I got that afternoon (but were a few commercial beers around so I wasn’t left thirsty.) The sparge water that was heated during the mash,  was pumped to the top of the mash tun and it washed the rest of the sugars into the brew kettle.  The brew kettle was nearly full as they started heating the wort for the boil.  Aaron pulled out several packs of hops, as he decided on which one to use for this batch.  The dual burners in the cement board box heated the wort quickly and soon it was at a rolling boil and with a little adjustment to the burners, they backing off the heat a bit to prevent a boil over.  Well it helped for a while as they did have a slight boilover, their first for this system, but every system needs a boil over so they might as well get it over with.

I had to leave before the end of the boil so I didn’t get to see them use the chiller or put the wort in their fermenters and pitch the yeast.  For fermenters they have 60 gallon plastic conical fermenters mounted on wood stands they made.  These fermenters are designed for wine and beer they have had good luck with them so far.  An earlier batch that got infected due to location issues cleaned up well and the following batch had no infection.

Overall they have kept their investments to a minimum waiting to get all the approvals before they get too far ahead of themselves.  A week after my visit, they got their Federal approval and are one major step closer to brewing beer commercially.  Distribution plans are for kegs to go to local establishments and initially no tap room.  We talked about the pros and cons of bottling or growlers but it had not been decided yet so we will see how it all works out.

You can find out more about Junkyard Brewing on Facebook at: http://www.facebook.com/JunkyardBrewery