The Love of Beer Film & Discussion 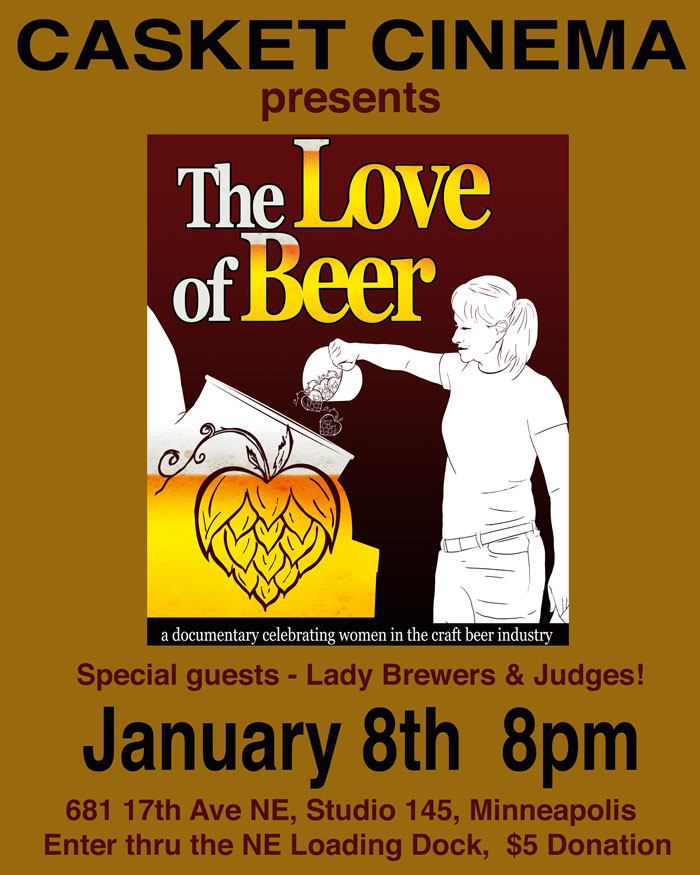 For the New Year Casket we are going bottoms up and will turn stereotypes upside down and lead you into the world of lady brewers, in the film, “The Love of Beer”. This documentary enlightens us that many women not only work in the craft brewing business but they thrive! The star of this movie is Tonya Cornett of 10 Barrel Brewing. She has won handfuls of awards for her Oregon based beers, including the Brewmaster of the Year (2009) at the Annual World Beer Cup Competition. The film also ventures into other jobs women do in the industry and why they are attracted to this business. Joining us after the film for a salon discussion will a fantastic panel of local women involved in the Twin Cities brewing scene; Beer Judge and educator Gera Exire Latour will lead a panel discussion with Tara Alcure of Green Flash Brewing, Kathleen Culhane of Sidhe Brewing and Rachel Grey of Herkimer Brewing. This promises to be an awesome event of Film, Women and Beer. We hope you can make it.

More info on the film is available at; http://theloveofbeermovie.com/

If the event is on a first Thursday the building will be open, if not enter the Casket, via the north side loading door.

We are a micro/studio-cinema dedicated to showing the best in independent films and documentaries. After each screening we delve into the subject with a Q& A with special guests and/or filmmakers.

Please rsvp and get more info to get to this screening at the Casket Cinema Facebook page: http://www.facebook.com/groups/Casketcinema