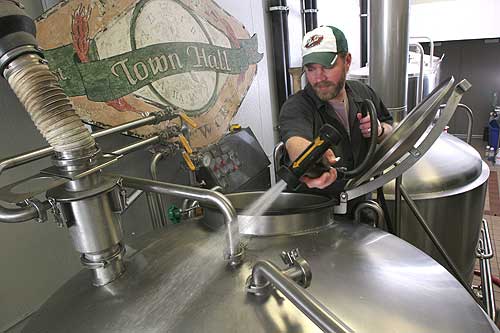 Thanks to Elliot Ginsburg & Erin Conway for their contribution. Elliot and Erin are associates at the law firm W. Michael Garner, P.A. (www.franchisedealerlaw.com). W. Michael Garner, P.A. specializes in franchise, dealer, and distribution law, and the firm has also done legal work for breweries. As we see a proliferation of taprooms in Minnesota, I think one of our next steps needs to involve addressing how brewpubs in the state have grown and evolved. Read on for a legal perspective on brewpub distribution. Cheers!

By Elliot Ginsburg[1] and Erin Conway[2]

Generally, states divide the alcohol industry into three tiers: manufacturing, distribution, and retail.  Historically, this was done to prevent large manufacturers from vertically and horizontally integrating, thereby reducing competition and choice, and increasing price.[3]  If brewers could own wholesalers, for example, they could push out competing brewers and increase prices artificially.  The three-tier system was also embraced by many states to encourage moderate consumption and an orderly collection of tax revenue.[4]  The key to the three-tier system is that no business operating in any one tier can have an interest in a business in any other tier.[5]

Brewpubs, however, do not fit neatly into any one tier.  Brewpubs operate as manufacturers in the sense that they brew beer for off-site consumption, and they also operate as retailers in the sense that they sell beer directly to consumers.[7]  In some states, brewpubs can distribute their brews through wholesalers to other retail facilities[8] but many states allow brewpubs to sell beer only on-site for on-premises or off-premises consumption.  Minnesota, for example, allows brewpubs to sell beer only on-site for either on-site consumption, or off-site consumption in growlers or large bottles.[9]  Thus, Minnesota brewpubs are more like retailers than traditional “production brewers.”  Production brewers produce beer and self-distribute or sell their brews to wholesalers who then sell to liquor stores and bars to sell to consumers.

Minnesota brewpubs, including Minneapolis Town Hall Brewery and Fitger’s Brewhouse, tried to pass a law in 2011 to allow brewpubs to distribute their beers through wholesalers.  The Minnesota Beer Wholesalers Association (the “MBWA”) opposed this legislation for reasons discussed below and the bill did not make it out of committee.

The question that this article addresses is whether brewpubs in Minnesota can find a way to distribute their brews through wholesalers, while maintaining the integrity of the three-tier system and allaying the MBWA’s concerns.

First, it should be noted that alcohol laws in Minnesota, while difficult to change, can be altered to create opportunities for growth.  For example, until recently, brewpubs were the only manufacturers that could sell beer on premises.  Under the new “Surly Law,” as it is often referred (named after the popular Minnesota brewery that led the push for the change in law), brewers selling less than 250,000 barrels annually can sell beer for consumption on the brewer’s premises if they have a taproom license even if they also sell their product through wholesalers.  Under this law, these brewers can sell their beer directly to consumers for on-site consumption and can also sell their brews to wholesalers so that consumers can purchase them at liquor stores and other bars and restaurants.  This has opened doors for new breweries located in the Twin Cities, such as Indeed Brewing, Fulton, Northgate, and Dangerous Man, as well as some that are not yet operating but are in the early stages of development, such as Sociable Cider Werks (launching in the late fall of 2013) and Fair State Brewing Cooperative.  Of course, trade-offs were made by the brewers that benefit from this law: the taproom license only allows for the sale of the manufacturer’s beer (no wine, spirits, or other beers can be sold) in the taproom; and a brewer may have only one taproom license.[10]

Despite these limitations, the law was a victory for craft breweries that now have an opportunity to expand quickly without relying too heavily on debt.  Operation of a taproom allows breweries seeking to expand to obtain an additional source of revenue to help finance larger brewing facilities.  Essentially, the taproom law permits an economic model that allows taproom sales to generate revenue that can spur growth, thereby lowering the initial burdens of entry into the brewing business.

The 2011 legislation that would have allowed brewpubs to distribute through wholesalers could have provided similar economic benefits to brewpubs in Minnesota.  Fans of places like Town Hall Brewery were excited by the prospect of picking up a six pack (or four pack) of Masala Mama (as of March 30, 2013, rated the thirteenth best IPA in the world by ratebeer.com[11]) at their local liquor store.

The MBWA’s resistance to this change stemmed from a fear that it would raise constitutional issues under the Dormant Commerce Clause.  The MBWA supported this argument by pointing to the case Granholm v. Heald, 544 U.S. 460 (2005).

The Supreme Court in Granholm v. Heald, 544 U.S. 460 (2005) held that a New York statute requiring out-of-state wineries to establish distribution operations in New York in order to gain the privilege of directly shipping wines to New York customers discriminated in favor of in-state wineries, which were permitted to ship directly to consumers.  Thus, the Supreme Court held that the law violated the Dormant Commerce Clause because it discriminated against out-of-state wineries, placing a burden on them that was not imposed on in-state wineries: a physical distribution operation in New York, separate and apart from the winery itself.

This is an esoteric, but important distinction.  The New York law worked as follows:

A law in Minnesota permitting brewpubs to distribute through wholesalers and to operate retail facilities would not provide any benefit to in-state brewers that out of state brewpubs could not enjoy.

The MBWA’s concern confused apples and oranges (or IPAs and lagers).  The concern in New York was about discrimination in the three-tiered distribution process.  In-state wineries could ship directly to consumers, but out of state wineries had to go through wholesalers licensed in the state of New York.

Therefore, the MBWA’s concern about the constitutionality of the proposed brewpub legislation was misguided.  There is nothing unconstitutional about permitting brewpubs to sell brews in growlers for off-premises consumption while also allowing them to distribute through wholesalers.  This is because nothing about this discriminates against interstate commerce.  In fact, Minnesota wineries with a farm winery license are permitted to sell, on the winery premises, table, sparkling, or fortified wines produced by that winery for off-premises consumption, as well as to wholesalers.[13]  The proposed brewpub legislation would have done nothing more than grant brewpubs the same rights as farm wineries: (1) to sell, on the premises, wines produced by that winery for on-site or off-site consumption at retail; and (2) to sell their wines through wholesalers.

Outside of the MBWA’s constitutional concern, however, was the legitimate concern that allowing brewpubs to distribute through wholesalers would lead to large brewers like Anheuser-Busch InBev to purchase retail facilities like Applebee’s, creating “tied houses,” allowing AB InBev, for example, to vertically integrate, reducing competition and consumer choice, and increasing prices.  Essentially, the fear is that a large brewer like AB InBev could buy an Applebee’s restaurant and exclude all beer not produced by AB InBev.  One way to circumvent this problem, however, would be to place a barrel limit on those brewers that can operate both as manufacturers (that sell to wholesalers) and brewpubs, much like the “Surly Law” imposes on taproom licensed brewers.

As the law stands now, out-of-state brewpubs can sell directly to consumers at their facilities in whatever state they operate and can distribute their brews to a broader market in Minnesota through wholesalers, but in-state brewpubs are not able to reach this broader market through wholesalers.  This is why Minnesota beer drinkers can find Capital Brewery beer (brewed by a Wisconsin brewpub) at their local liquor store, but have to go directly to Town Hall or Fitger’s Brewhouse if they want to buy one of their brews.[14]

Allowing brewpubs to sell their products to wholesalers would not be unconstitutional because it does not discriminate against out-of-state brewers.  The three-tier system would be applied equally to brewpubs in and out of Minnesota.  While Minnesota brewpubs would be able to sell their brews at retail, this does not discriminate against interstate commerce, just as selling wine at a New York winery is permissible even though New York wineries may not ship directly to consumers if out-of-state wineries cannot do the same.

In the interest of full disclosure, and in case it was not clear, my co-author and I enjoy a good beer.  In fact, we try to have a new beer once a week after work to continue to broaden our hop horizons.

[2] Erin Conway is an associate at the law firm W. Michael Garner, P.A.  She has practiced law for nearly one year.

[4] http://www.mnbwa.com/Industry%20&%20Regulations/Three%20Tier%20System.html.  Prior to prohibition, alcohol retailers were closely controlled by large distillers and brewers through leases, chattel mortgages, credit, and other financial interests.  Thus, retailers had to adopt programs to promote consumption and increase sales.  Thus, the three-tier system was in part a response to the incentive to increase drinking.  http://www.gppf.org/article.asp?RT=13&p=pub/Regulation/alcohol.htm.

[14] Wis. Stat. § 125.295 allows brewpubs to sell directly to consumers at retail and also allows them to sell to wholesalers.  This law has not been challenged as unconstitutional.