By ryan on February 28, 2008in bars/restaurants 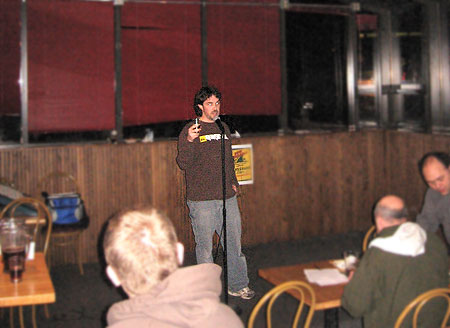 Stub & Herb’s had their first in a series of beer tastings last night. I headed down to check it out – after all, it’s beer, right? A rep from Sierra Nevada spoke first and passed around  some beers – their pale ale, ESB and this year’s Bigfoot. Don Osborn spoke next, taking the homebrewer’s perspective and talking about some beer styles while sharing some of his homebrew (a steam beer), Flat Earth’s Winter Warlock and a flight of pale ales from Brau Brothers, Summit and Furthermore as well as Left Hand Sawtooth ESB. As always, it’s interesting to see a range of flavors within one general style of beer.

It was a relaxed, low-key event with lots of audience participation, some tasty appetizers and plenty of good beer. For $5, the event was a steal. Thanks to Jon for putting this together!