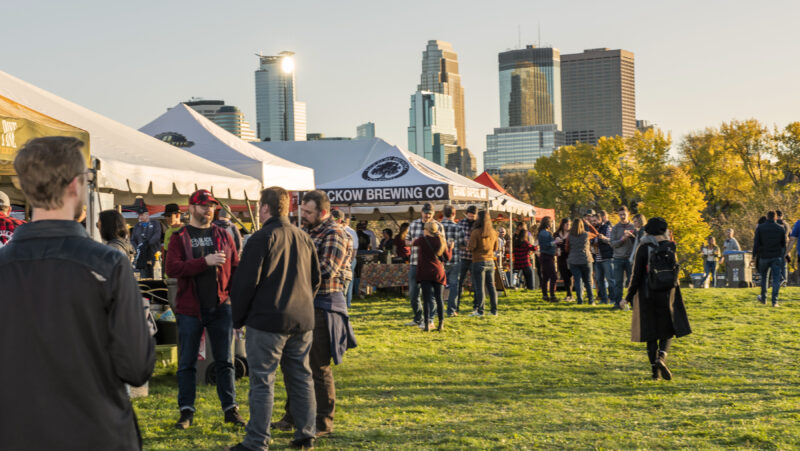 The Autumn Brew Review is back and it returns to a familiar spot along the Mississippi River in Northeast Minneapolis. Proof of vaccination will be required to attend the event which will almost certainly leave some upset, but the health of the attendees and vendors is being put first during this uncertain time.

“The health and wellness of craft beer employees and customers is extremely important to the Guild, and so is continuing to host the festivals that energize and connect the craft beer community. As COVID continues to be a concern throughout the state, we felt it was our responsibility to do what we could to support community and industry safety at ABR,” says Bennett McGinty. “We know not everyone will be happy with the vaccine requirement, but our goal is to limit the potential negative impact our festival could have on community health, and allow people to be more confident in working, attending, and volunteering at ABR.”

This event will once again showcase Minnesota breweries and some of their finest creations on Saturday, October 16th beginning at 1:30 pm and going until 5 pm. These Minnesota Craft Brewers Guild events are often the best way to sample beers from breweries all across Minnesota without the long drive. “We hear from attendees all the time that they love how they actually get to talk with the head brewers and owners of Minnesota’s breweries at our festivals. Our fests are a great way for craft beer fans to connect in a new way with some of their favorite local businesses, and discover new places they haven’t been able to try yet,” said Lauren Bennett McGinty, Executive Director of the MNCBG.

One of those breweries is Hoops Brewing in Duluth. Dave Hoops who founded the brewery is known for his fruit concoctions as well as his ability to utilize hot peppers in a subtle way. Some of the beers he plans to bring include a Raspberry Wheat Ale, Bamberg Lager, Wood Smoked Hefeweizen, and a Pepper Ale.

Many of the local breweries will bring a special beer or two to spice things up and show attendees what they are capable of. One such beer that will be worth seeking out is the 2021 version of Lost Moon from Pryes Brewing in Minneapolis. This Russian Imperial Stout won Silver at the U.S. Open Beer Championship. Expect rich, roasted malts with Belgian candy sugar and notes of chocolate and caramel. Perfect for a fall day in the Twin Cities. They will also bring Cartographer, Star Seer, and a triple hopped honey DIPA featuring locally sourced honey.

The folks at Steel Toe haven’t solidified their choices yet, but expect to see Size 4, Provider, and Rainmaker on their menu. Rainmaker is one of the most underrated beers made in town. Classified as a Double Red Ale—this beer brings piney hops to the table with toasty caramel malts—and sports a lovely red hue when poured into your favorite glass. Be sure to seek this one out.

Tickets will cost $60 to attend, and $15 for sober drivers. ABR will happen rain or shine so be sure to keep an eye on the forecast. You can purchase tickets here. 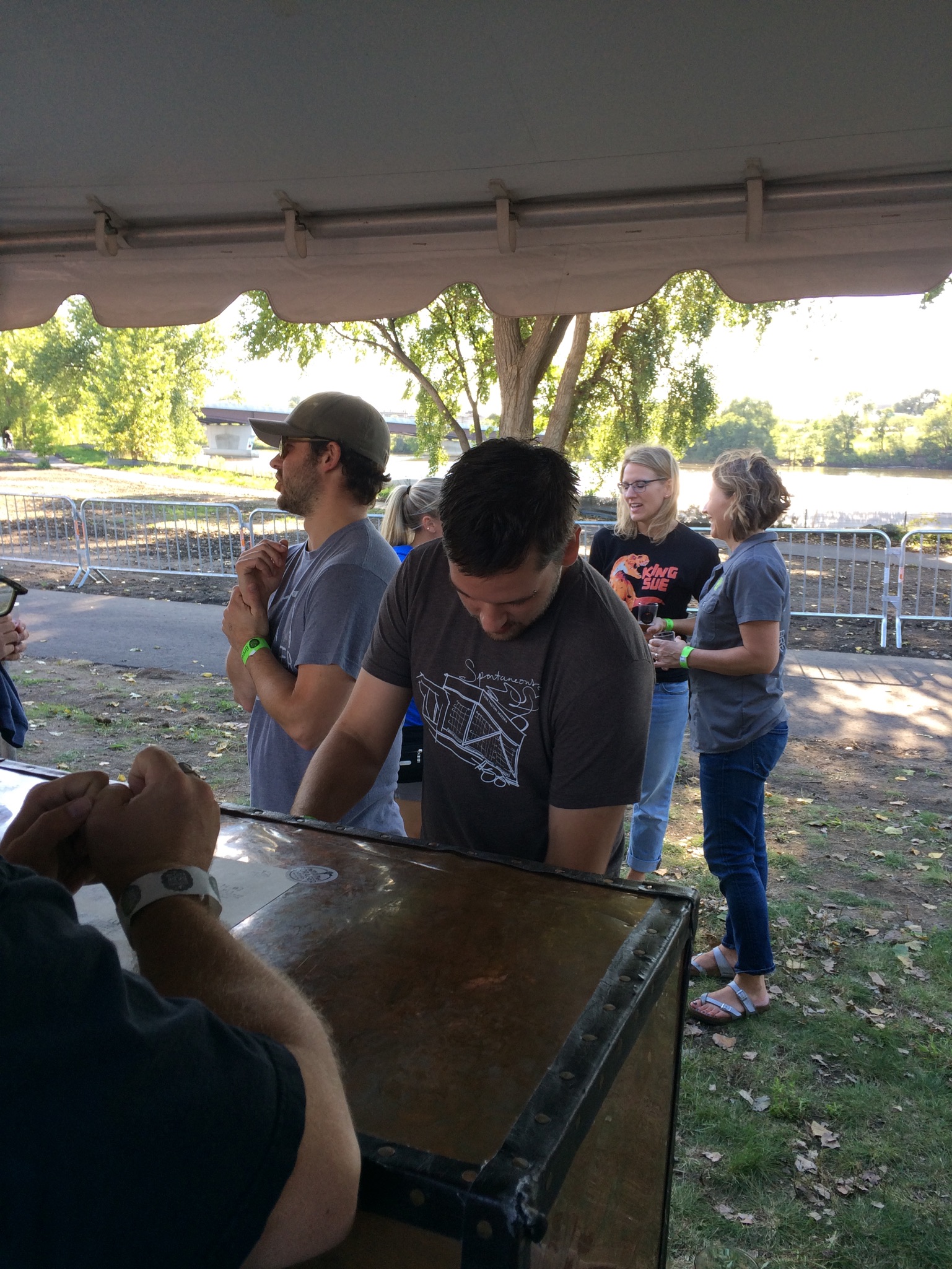 Here’s a little teaser from Mike at Minneapolis Town Hall Brewery regarding their special offerings for Autumn Brew Review:

Here are some special beers you’ll find at Autumn Brew Review from Fitger’s Brewhouse in Duluth. Thanks to Dave for the heads up! Enjoy!

By ryan on September 6, 2012in bars/restaurants, beer events, breweries 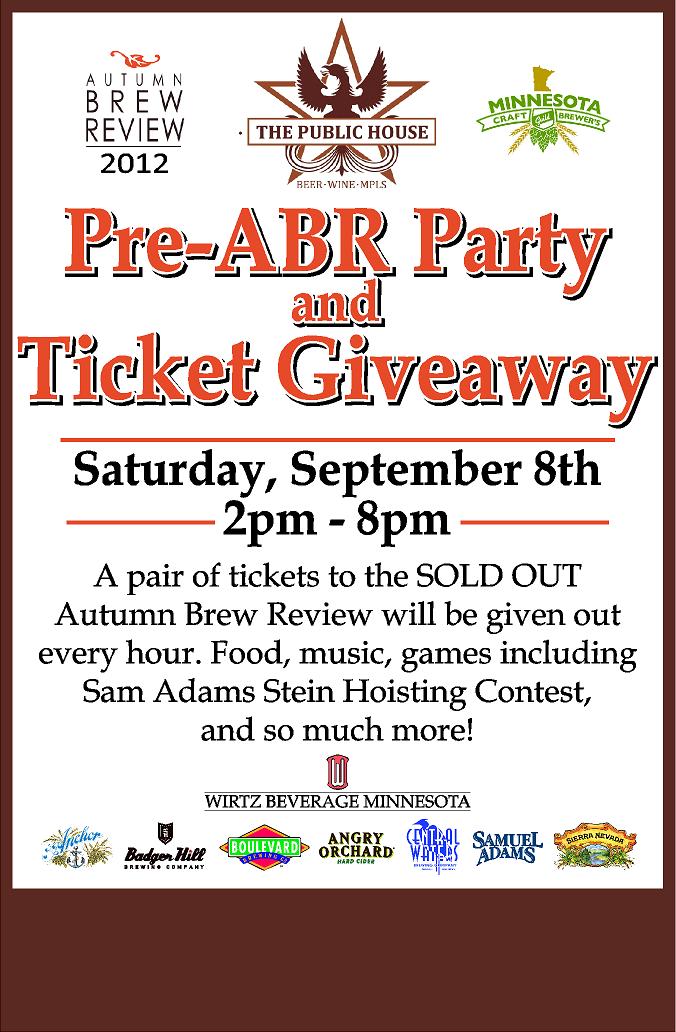 Head over to Public House in Minneapolis on Saturday from 2-8pm for an afternoon of food, music, games (including a Sam Adams Stein Hoisting Contest) and more.

Bonus: A pair of tickets for the SOLD OUT Autumn Brew Review will be given out every hour.