The Axeman Leaveth: Todd Haug Steps Down at Surly Brewing 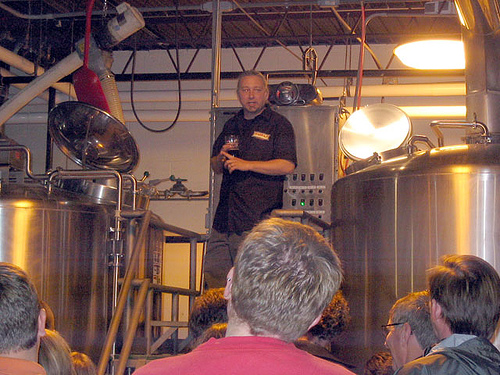 Here’s the official and final word from Surly Brewing Co. TL:DR, Head of Brewing Operations at Surly Brewing Co., Todd Haug has resigned his position with the brewery to pursue new challenges. First and foremost, we wish him well – Surly Brewing got its start not long after I launched MNBeer.com and Todd and Omar have been huge supporters of the site for as long as I can remember.

After more than 10 years setting the pace of the craft beer revolution in Minnesota, Surly Brewing Co., Head of Brewing Operations Todd Haug has resigned his position at the Twin Cities brewery.

“I’d like to thank our family, friends and fans – Surly Nation – for always believing in our vision. It never gets old to hear people tell you how much they enjoy your beer.  Omar and I set out with the modest goal to build a brewery so we could create a different kind of craft beer – the kind we wanted to drink – and I think we achieved that.”

Todd earned a reputation for refusing to brew-to-style. He defined the undefinable and brewed beer his way, which was rarely the easy way, earning the brewery gold medals in the process.

Omar Ansari, Founder and President of Surly Brewing says, “Todd has been an incredibly influential part of Surly since the beginning and was instrumental in building the brewery from the ground-up, often with his own two hands; brewing, welding, making connections and forming collaborations to establish the irreverent brand it is today. His talent is undeniable, and he will always be a huge part of who we are. He will be missed.”

Todd is stepping down from his role to pursue other opportunities and challenges in the industry that he has worked in for 25 years. The future is bright, and adventure awaits.

“I leave my brewhouses in the extremely capable hands of our co-lead brewers and the innovative brewing team we’ve mentored together. I eagerly look forward to seeing what the next generation of Surly brewers will create,” says Haug. “This is an opportunity for them to take the torch and continue the legacy we’ve been building for 10 years now.”

It’s been a hell of a ride with Todd in the front seat, keeping the music loud and the speed fast. He’s the wizard, the bitter brewer and the creative genius.

Surly Nation thanks you.