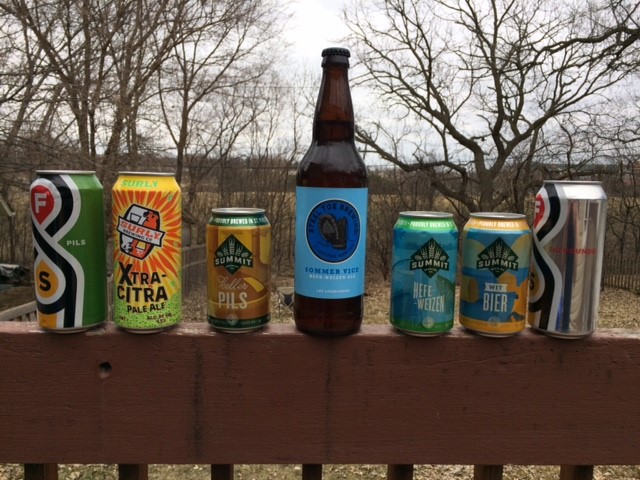 Warm weather is just around the corner and there are plenty of new local beer options hitting store shelves soon. Summit is releasing a Boundary Waters twelve pack while Surly is going year-round with their Xtra Citra release. Steel Toe will be releasing Sommer Vice and Fair State just released their Du Pounde and Pilsner. We tried these out with our thoughts below.

Summit Wit – This is going to be a hit on those 90 degree days. It’s got all the things you look for in the style. Spices, citrus, and those nice bubblegum notes from the Belgian yeast drive this beer. A perfect replacement for that Blue Moon sitting in the back of your fridge. This is part of the Boundary Waters twelve pack.

Summit Hefeweizen – It’s back! This is a well-balanced Hefe with some nice banana and clove notes that aren’t as overpowering as some of the other options out there. Not my favorite example of a Hefeweizen but it’s certainly tasty. This can also be found in the Boundary Waters pack.

Steel Toe Sommer Vice – This is one of my favorite local examples of a Hefeweizen. Big clove and bubblegum flavors in this hazy beer set it apart from some of the others. This will hit the taproom and store shelves in May. My only issue is that I want this in cans. One 22 oz. bomber won’t do the trick. (Notes for this were taken from last year. The recipe will be the same I’m told)

Fair State Du Pounde – Centennial hops give this a nice floral character in the nose and contributes a nice dose of citrus in every sip. This wheat based beer also utilizes a French Saison yeast which provides a slight funk to this one. Fill your cooler with this at your picnic or graduation party and you’ll be the most popular person there.

Surly Xtra Citra – Session beers are still growing in popularity, here and around the country. Xtra Citra is Surly’s version of the style and it doesn’t dissapoint. In fact, this is my favorite local session beer along with Size 4 from Steel Toe. Huge citrus flavor with a light body, and for the low price of $6.99 a four pack this should be in your fridge all summer long. I’m told this will also be available in twelve packs of 12 oz. cans around Memorial Day.

Summit Keller Pils – They say the best way to judge the quality of a brewery is by trying their Pilsner. This is because it’s near impossible to mask any off flavors in this style of beer. Well Summit hit a home run with this offering and I dare you to find a better local option outside of Schell’s. This is easily the best new recipe (debuted last year) from the 30-year-old brewery in St. Paul. Be sure to soak your brats in that cheap domestic stuff and save this for sipping out by the grill. This is available in twelve packs and can also be found in the Boundary Waters pack.

Fair State Pils – A nice, dry Pilsner with earthy aromas and a heavy addition of Hallertau Mittelfruh hops. Not quite on the same level as the Schell’s Pils, but certainly worth a spot in your cooler on a fishing trip. Drink this one as cold as possible.