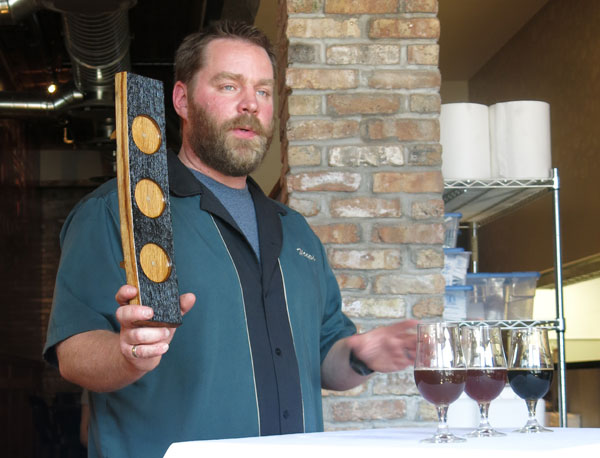 Town Hall Brewery has been hosting Barrel Aged Week for seven years now. This is one of the most popular events at the Seven Corners brewpub and it’s a lot of work so it makes sense that they’d dedicate an entire week to celebrate these brews. “These [beers] are a lot of work” says head brewer Mike Hoops. “It’s a lot easier to release them all at once.” February is also a slower month for most bars and restaurants and this was a way to get people to come out of their homes and into the brewpub. Barrel Aged Week will start on Monday, February 15th and run through Saturday, February 20th.

They will release about two beers per day (schedule below) at 5 PM all week long on draft and for sale in “mini growlers” and most of them should have a pretty good supply. “There’s a sizeable amount of these. We expect to sell about 150 [mini growlers] of each” says Hoops. Ticket sales are limited for these growlers and will begin on Sunday, February 14th at 10:00 AM.

The lineup looks incredible with one of the highlights being the Trois Vie Series. There are a total of four in the series, all of which spent time in French oak Pinot Noir barrels that had also stored Kentucky bourbon in them. Hence the name “Trois Vie”, or “Barrels with Three Lives.” The grouping includes a Belgian Style Tripel, a Belgian Style Quadrupel, a Barleywine, and an Imperial Stout. All of these will be released on Monday, February 15th.

When should you enjoy these beers? “These beers are aged properly and people should drink them within reasonable time” says Hoops. “Drink them with your friends.”

Great advice from a wise man.