By anonymous on September 29, 2011in brewpubs 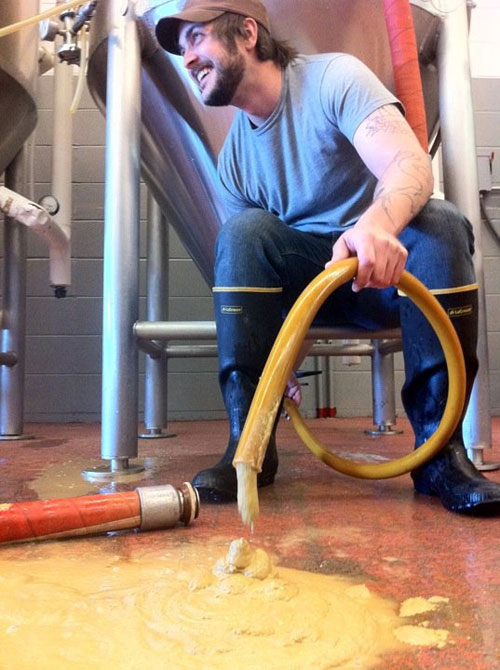 I had the opportunity to sit down with Mike Willaford, new brewmaster at The Herkimer Pub and Brewery, and chat him up about brewing beer. – Kat

How long have you been brewing and how did you get into brewing?

I made my first home brew in May of 2009. My buddy and I were drinking a beer and we thought, “we can make this”. So we tried it, and it was awful! We had no clue what we were doing. From there I just kept brewing for about four weeks straight. My first three beers were from kits and then I made an all grain batch. It was a good beer. I remember thinking after I brewed my first batch of beer, “I want to do this for a living, I’m going to do this for the rest of my life.” 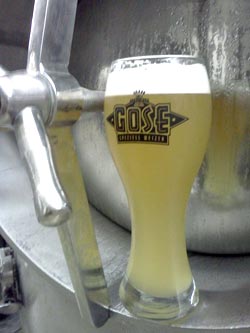 I met the Lift Bridge guys talking over beers, and sampling one of my home brews. They liked my home brew and saw that I had a devout passion for beer, so they offered me a job as a delivery driver. It wasn’t long before I had an opportunity to help in the brewing process. My first ABR working with Lift Bridge I got to debut my first beer, Chi Girl. I used to be a barista at a coffee shop and I love blending flavors. I saw similarities in the coffee and beer brewing process that gave me the confidence to know that I could make a product that makes me proud.

When I was at Flat Earth I was proud of the beers I was putting out. I give a lot of credit to Jeff Williamson, “without him I would not be the brewer I am today.” He is a mentor to me and is such a good person. Jeff has walked me through my career and has been a big supporter of mine, I will always be grateful to him for what he has taught me.

Being a brewmaster at the Herkimer must come with some challenges, how are you approaching these challenges?

In my first five months brewing at the Herkimer I’ve learned that being a brew master is much harder then it looks. When your an assistant brewer it’s a lot of work but you don’t have the stresses of managing the brew process. Our beers move quickly at the Herkimer with a batch of beer lasting as little as six hours and as long as two weeks

Everything is about quality for me. German beers aren’t going to necessarily “wow you” or “blow you away”, but they are the epitome of quality. Everyday for me is about putting out the best product I can, taking my time and making sure I am giving the beers enough time to age. It can be challenging with the number of beers we go through.

Every brewer brings a slightly different element to the table. You could put 15 brewers in a room with the same ingredients, same water, brewing the same beer and the beers would all have a little different taste to them.

On any given day my goal is to be proud of my product. If a batch of beer is brewed that I am not proud of, the customer will never see it. I would rather dump a batch myself then for you to dump it at the counter. It is about quality and making sure that everyday I walk in here I give it my best effort. People come to a bar and want to relax. How relaxing is a junky beer? It’s not! It’s stressful. It’s frustrating. “Why would I give people a beer I wouldn’t drink?”

What is your greatest success so far? 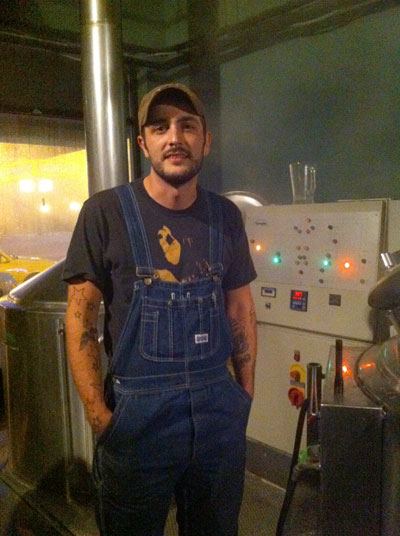 My dad was a guy that never drank. I never saw him drink my entire life but, the first and only beer he ever drank, was a beer I made. He passed away about a month and a half ago. Having the opportunity to share a beer that I made with my dad, at least once, gave him the opportunity to see the hard work I put into brewing.

When it comes to beers I have brewed I am really proud to the Two Finger IPA I brewed at Flat Earth for WinterFest. Triple dry-hopping the beer and randallizing hop juice into it is a little overkill, but also awesome!

The first time I ever dumped a batch of beer, it was a Tooler’s Weiss. During the brew process I was having issues with the pump, it got clogged full of DMS and tasted like creamed corn. I’ve since brewed another Tooler’s Weiss and it came out beautifully.

What are some of your favorites in your brew day playlist?

Music is a very important part of brew day. The style of music often pairs with the style of beer I am brewing that day. The Gose is a mysterious beer so I might brew that listening to Mastodon. Today I brewed the Handy’s while listening to The Best of Grand Master Flash, I like to switch things up.

My most likely choice is often times metal, “good beer needs metal”. You need the aggressiveness and the fast pace cranking into the beer. My typical brew day playlist is; Judas Priest, Iron Maiden, Motörhead, Black Sabbath, Pentagram. I have always been a big metal fan. I used to play drums in a death metal band. My dad listened to old school metal and I loved it as a kid.

What lies ahead for you in the next year and beyond?

I’m excited for my first beer competition at The World Beer Cup. I have been working on a new beer recipe for the last several months. We will be brewing a Triple Bock, using the sake #7 yeast. We are trying to go for a high, high alcohol beer, in the mid-20s. My goal is for the beer to have the fruitiness of sake yeast, but a chocolate, cognac-like flavor and a dark velvety, whiskey-like body, using mash reiteration. I had the fortune of being part of the finishing and aging process of Winter Warlock at Flat Earth and learning how to keep “big beers” going. I’ve been doing a lot of research on higher alcohol beers and the process. I have talked to a lot of brewers who have been doing this for a while and problems I might encounter.

My home brews are usually the “odd” beers I brew, I like to challenge myself. The #1 rule to remember as a brewer is, “just because you can doesn’t mean you should.” There’s some guys out there doing a lot of cool stuff experimentally and it’s great to see new styles. I don’t ever want to see craft brewing stop progressing.