Welcome to the first in a series of interviews with the interesting people involved with Minnesota’s great beer. Our first victim is Doug Hoverson, author of Land of Amber Waters, the History of Brewing in Minnesota. We offered Doug a six-pack of questions and he graciously answered them! 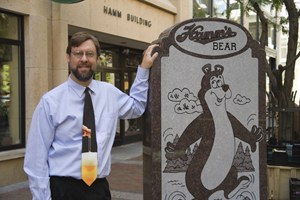 How long have you been working on this epic? I first recall hearing about it sometime in 2005 and have to imagine that this isn’t a normal research project… the scale of it has to be fairly encompassing…

The first time I actually introduced myself to someone with the claim that I was “writing a book on the history of brewing in Minnesota” was during the fall of 1997. I had been doing some preliminary research at the Minnesota Historical Society (inspired by seeing an 1882 ad for John Erickson’s brewery in Moorhead), and then went down the hill to have a beer at the recently opened Great Waters Brewing Co. After talking to Mark van Wie and Tod Fyten, it seemed like it might not be such a crazy idea after all. In October I interviewed David Johnson at Ambleside Brewing Co., and began to gradually build up my files. I researched a bit during each summer vacation, but to do it right, I’d need to be able to travel and visit collectors and museums during business hours. I got a sabbatical leave from Saint Thomas Academy during the 2004-05 school year, and got the bulk of the research done that year. During the fall of 2004, Joe Lanners (then head brewer at Great Waters) referred me to the University of Minnesota Press, and the serious writing began.

At one time I tried to keep track of the hours I worked, but I lost track almost immediately. I looked through every county history book I could find, and a lot of city and town histories as well. I looked through every single page of the 1850, 1860 and 1870 population and industry censuses on microfilm. (The 1880 census was searchable on line by occupation, and most of the 1890 census was lost in a fire.) I looked at what remained of 45 years of excise tax records, most of them in the original ledger books at National Archives depositories in Chicago and Kansas City. I have probably looked at almost 1,000 years worth of small town newspapers on microfilm–but Garrison Keillor’s Lake Wobegon stories are a lot funnier now after having seen how these towns function.

Luckily, it wasn’t all archival work. I have visited more than 100 breweries and brewpubs in the U.S., Canada and Germany, have sampled a couple thousand different beers, became a certified beer judge, and finally won some medals in major homebrewing competitions. I’ve still got a lot to learn, so I may have to do a couple more beer books to accommodate that.

What was the first Minnesota beer to pass your lips? How about the most recent?

I didn’t pay a lot of attention to the first Minnesota beer at the time, since it was probably in the early 1980s and the emphasis was cost, not heritage. My guess is that it was probably Schmidt, since that was my Dad’s usual house beer. (The first ever, period, was Stroh’s Light, but you asked about beer.) The first craft beer was probably Ulmer Braun, though Summit Porter and James Page Boundary Waters were probably right behind it.

These questions are being answered with a pint of Surlyfest closest hand. All those hops and a hint of rye–and from a can!

Can you give us a teaser of one amazing story of Minnesota beer history?

With all the great beers, the dramatic fires, and the tragic endings in Minnesota beer history, it’s tough to pick just one. Right now, my winner is the battle between the two breweries in Reads Landing in 1867. The owner of the Pepin Brewery, Gottlieb Walty, found the owner of the Upper Brewery, Jacob Burkhardt, throwing phosphorous into his lagering cellar. Walty had been keeping a watch because the cellar had been poisoned twice before, and on this occasion Walty shot Burkhardt with two loads of buckshot, wounding him severely but not fatally.

Runner-up:
Why would anyone decide to expand their brewery by opening a branch in Utah, especially in the early 1890s when Utah wasn’t even a state yet because the Mormons still refused to give up polygamy, say nothing of consuming alcohol? Yet for some reason, the firm of Becker & Schellhas of Winona did exactly that. The new branch, located in the Yankee enclave of Ogden, ended up lasting until the 1960s as the Becker Brewing Co., outliving the parent company in Winona by nearly half a century.

Is there anything you wish you knew about the history of beer in Minnesota that you just don’t know?

The biggest mystery is one of the last things I discovered. There was a one sentence reference in a Western Brewer issue from the late 1870s which reported that the brewery in Northfield had a “colored” brewer. The Northfield papers of the time ignored the brewery (being good temperance folk), the brewer doesn’t appear
in the 1880 census, and I have found no other reference to him. This man was clearly a pioneer, but who was he? 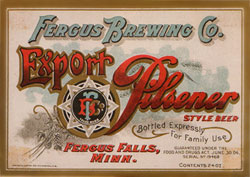 Fergus Falls from 1882-1884 is still ticking me off. I think I’ve got it right in the book, but a lot of the sources were unclear or conflicting, the newspapers in those years were not helpful, and there were so many changes in that period that I’m still not quite sure which brewery ended up as which.

There were probably a few other breweries that were operating for a brief time prior to the beginning of the excise tax in 1862, but these are probably lost forever. Likewise, there are several breweries which only have vague references in contemporary sources, and we may never know why they closed.

If there was one beer in Minnesota history that you wish you could taste, what would it be and why?

What I’d really like to do is to be transported back to one of the mid-sized cities with multiple breweries such as Red Wing, New Ulm, Winona or St. Cloud in about 1885 to be there for the first day of bock season (which back then was the first of May, as opposed to February these days). It would be fun to go from tavern to tavern sampling the different bocks fresh from the cellars. (Of course, I’ve been abused about my time traveling choices before: some people want to go back and avert wars, I just want to see if the beer someone was calling a Warzburger really was in that style.)
If you are going to force me into a single beer, it would probably be the Scotch Ale of Adam Stenger’s Rochester City Brewery from around 1870. This style is one of my favorites, Stenger’s was one of the few examples ever specifically advertised, and I’d be interested to see how the Scotch Ale of that period compared.

Runner-up would be the Grain Belt porter of the 1890s–again, to see how Minnesota brewers interpreted porter at the time.

If you were trapped on a desert island with only one beer, what would it be?

Well, if it’s a desert island, it’s probably pretty hot, so that barrel-aged Russian Imperial Stout wouldn’t be very refreshing. I’d want something quenching, but which doesn’t have to be ice cold, since I’ll probably have to chill it in the water off shore. I’d like something with a good balance of malt and hops, something with some complexity that won’t get boring, but not something so strong that I would be prevented from signaling for help. The two styles that spring to mind are either Oktoberfest or ESB. As for specific brands–I’ll duck that question by just insisting that it be Minnesota made, and by pointing out that growlers might float reasonably well if not full.