Back when Oskar Blues first starting canning their beers in 2002 many people wondered why they went that route. Now just about everyone is going to cans for many reasons, one of them being that you can take them anywhere. Just ask Steel Toe Brewing owner Jason Schoneman who tells me that they are going to start canning their suds—which are expected to hit a limited number of stores on July 13th. “The big reason we are going to cans is that we want our beer to be everywhere” he says. “We like going to the lake too, and bombers (22 oz. bottles) are a pain in the ass” he says laughing.

Steel Toe will be canning their popular flagships Size 7 IPA and Provider Golden Ale to start with other varieties to follow. The regal design of these cans will showcase the signature boot logo in a black on silver look that features the color associated with each brand. Green for Size 7 and yellow for Provider. They will be sold in 6 packs of 12 oz. cans and as stated above will start out at select retail locations across the metro beginning on July 13th. The plan then is to roll them out to all of their retail locations by the end of the year. You’ll still be able to find their other varieties in bomber bottles around town for now. 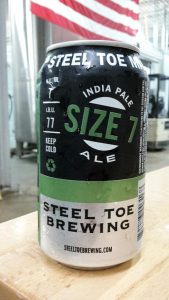 They had been talking about this change for a while but tank space was always the concern. So why the switch now? Two words: The customer. “We’ve had so many requests for this format. It’s what the customer wants” says Shoneman. Here’s to hoping Sommer Vice and Size 4 follow suit. 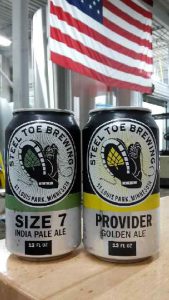 So grab your camping gear and don’t forget a six pack or two on your way out of town.