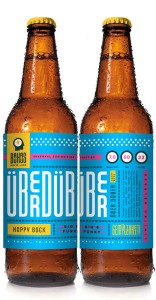 Bauhaus Brew Labs is coming at you with another winter seasonal offering – Über Düber. Über Düber is described as a “hoppy bock.” This beer is loosely based on a traditional German bock, albeit hopped up a bit. They’re added Oceanic hops to this traditionally malt-forward beer. At 7%, we’re curious to see how these two elements play together. Bauhaus notes earthy flavors of Black currant and cherry as well as a “straight up dank” aroma. I’m down for a few pints!

Look for 22 oz. bombers of Über Düber in stores in late January. And if you can’t wait, it will debut at the St. Paul Winter Beer Dabbler on January 24th. You’ll also be able to catch it on tap at Bauhaus and select other locations starting on the week of January 26th.