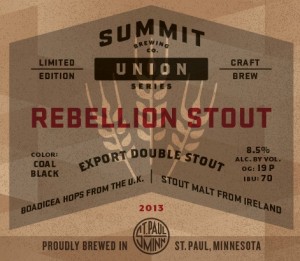 We dug up some information about the second beer in Summit Brewing Co.’s Union Series back in August. Now that we inch closer to an official release, we’re happy to share some more details.

First and foremost, you’ll start to see this beer the week of November 18th.

The recipe is based on an 1896 recipe from the recipe archives of a brewery in the Irish city of Cork. At 70 IBUs and 8.5% ABV, this beer should be nice, warming stout, perfect for the winter months. The name comes from Cork’s reputation as “The Rebel County” for its prominent  role in the Irish War of Independence and Irish Civil War.

Read on for more information.

Stout loosely based on 1896 recipe from Cork brewery

ST. PAUL, Minn. – (November 13, 2013) – Summit Brewing Company today announces the release of the second beer from the limited-release Union Series: Rebellion Stout. The Union Series explores the latest malts and hops in the industry by focusing on brewing with new raw materials and ingredients. Rebellion Stout will be available the week of November 18.

“Many famous Irish breweries originated in the coastal city of Cork,” said Damian McConn, Head Brewer at Summit. “Due to its fiercely independent nature, Cork is known as ‘The Rebel County’ and played a prominent role in the Irish War of Independence and Irish Civil War. Our Rebellion Stout is loosely based on a recipe from 1896 taken from the archives of an old Cork brewery.”

Rebellion Stout is single-hopped with Broadicea, a new UK dwarf hop named after a Celtic queen who led the fight against the Romans. Coal black in color, the beer is brewed with the quintessential Stout malt from County Cork, Ireland, making it a feisty stout with spicy, floral hop notes and a hearty, roasted malt character. A huge body leads to a dry, intensely bitter finish with flavors of mocha coffee, liquorice and black molasses.

Rebellion Stout marks the second entry in Summit’s Union series, where new and more obscure ingredients are combined with traditional techniques to produce limited-availability beers. While most brewers focus on the ingredients required to produce a certain style or idea of a beer, the Union concept is based upon first acquiring new ingredients then combining them in creative ways.